Today is Press Freedom Day. Now more than ever, we need to protect our access to news and world events from a free and independent press. Here are some links that should definitely spend some time today reading:

Bipartisan Call to Protect Journalists
Why the Times is taking down its paywall (and at the end of the three days, think about subscribing)

​I’ve spent a lot more time thinking about these past two weeks than I normally would for a political rant, so maybe this isn’t exactly a rant or a venting, although the smoke is spiraling out of my ears, nostrils, and hair follicles and just like in the cartoons, I can hear the whistling.
To start, I want to state unequivocally that I believe Dr. Christine Blasey Ford’s Judiciary Committee testimony in its entirety. Anyone who doubts her memory didn’t watch the testimony. She was incredibly careful and was clear to clarify her statements, and to say she didn’t know or didn’t remember if that was the case. She didn’t lose her temper or her composure despite the biased, some stupid questions from the Arizona prosecutor that the Judiciary Republicans hired (Senate Majority Leader McConnell called her a female assistant) because they couldn’t be human or decent to Dr. Ford.

END_OF_DOCUMENT_TOKEN_TO_BE_REPLACED

​Today is World Free Press Day. Many of us know that included in the First Amendment is our sacred freedom of the press, but because this document is two hundred thirty-one years old we don’t always give it the respect and attention it deserves. In fact, a free press in the United States is something that i think many of us take for granted. We assume that if we need to know it, CNN or MSNBC or The Washington Post, etc. will let us know in big twenty point headlines and short, pithy, decible-breaking sound bites.

For Halloween in 2016, I dressed as a journalist with a notebook, 1940s hat, and press pass. I quoted Thomas Jefferson. I got a few nods and nice costumes, but it wasn’t just a cosplay or costume. I had been watching the 2016 election for more than a year, and what was happening from the Trump campaign was was distressing to me.

I can’t have been the only one to see what was happening in this country, but I felt as though I was screaming into the void.

After two years of this Administration’s trampling of journalists and the press, they’ve erased mention of a free press in the Department of Justice’s internal manual. This country was founded on basic tenets, none more basic than the First Amendment, and a free press to keep the government accountable.

Now, Trump’s Justice Department was chipping away at those basic tenets with a sledgehammer.

There are journalists around the world, trying to get the truth out, who are kidnapped, tortured, and killed. We need to shine a light on this epidemic, and the United States needs to go back to leading the way for the press to be free.

The Committee to Protect Journalists is one organization who shines the light and keeps the rest of us aware of what’s happening around the world.

Press Freedom is under threat – Mission Report. This includes a link to download the full report. I urge you to read it.

Inauguration 2017: Know Your Rights|ACLU of DC

Inauguration 2017: Know Your Rights|ACLU of DC 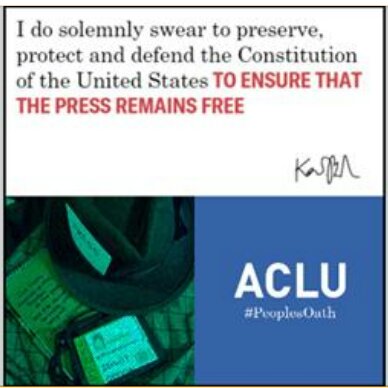 They are our first line of defense in allowing facts to remain important and valuable to all of us in this new media/Trump age.

and the American Society of Journalists and Authors 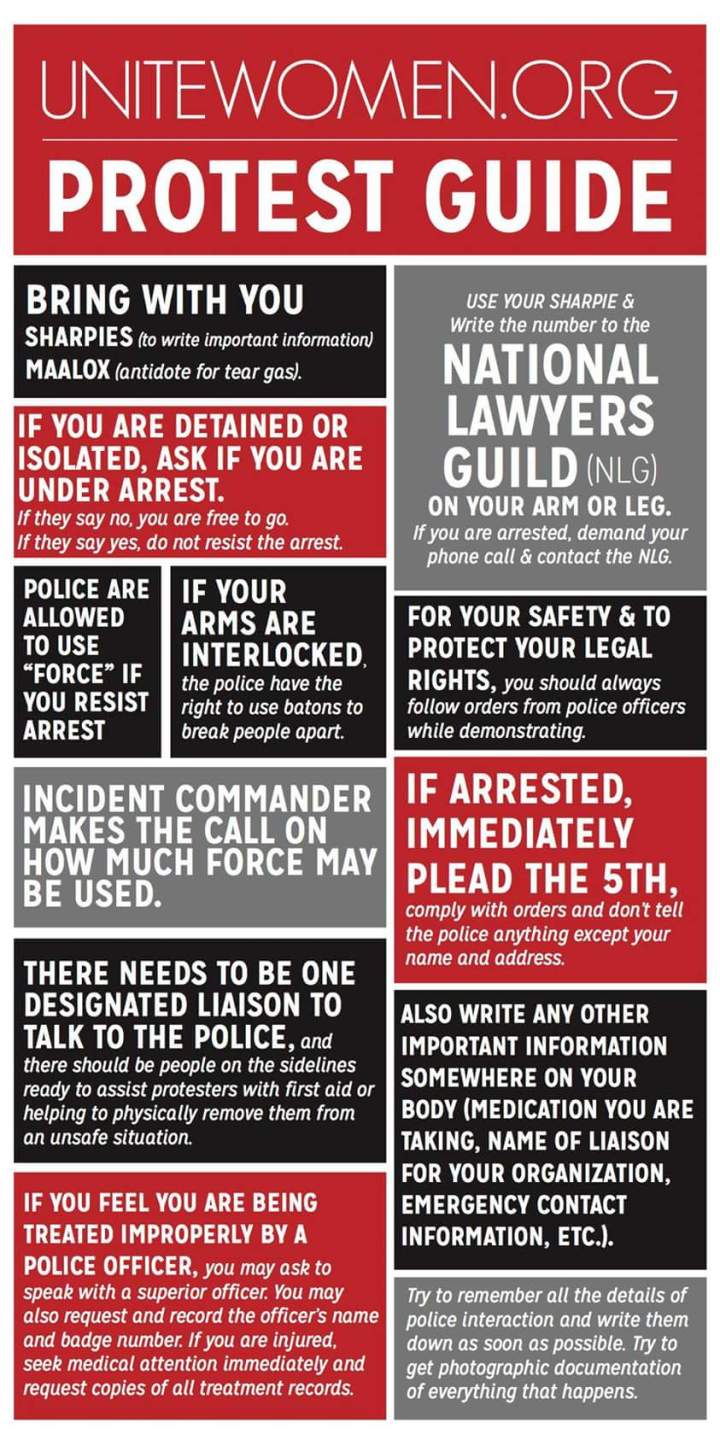 Graphic and advice shared from Unitewomen.org. 1/17/17

This is part of Dr. King’s last speech, given in Memphis, Tennessee the night before his assassination.

They are words to remember; today, tomorrow, Friday, and for the next four years:

Well, I don’t know what will happen now. We’ve got some difficult days ahead. But it really doesn’t matter with me now, because I’ve been to the mountaintop.

And I don’t mind.

Like anybody, I would like to live a long life. Longevity has its place. But I’m not concerned about that now. I just want to do God’s will. And He’s allowed me to go up to the mountain. And I’ve looked over. And I’ve seen the Promised Land. I may not get there with you. But I want you to know tonight, that we, as a people, will get to the promised land!

And so I’m happy, tonight.
I’m not worried about anything.
I’m not fearing any man!
Mine eyes have seen the glory of the coming of the Lord!!

​I spent half an hour on Sunday night writing about a free press. It was a little bit ranty, but it was a first draft. Before book and bed, I went to Facebook to catch up on my friends, and my entire feed was filled with Meryl Streep at the Golden Globes.

As a writer, it pains me to say that sometimes others can say what you are trying to say better than you could possibly, and that happened Sunday night. Meryl Streep was right on track with what I wanted to say, only much more eloquently than I could say it. I will still try my hand, and I will include a video of Meryl and a transcript of what she said.

Before anything else, I would like to note that the President-Elect responded exactly how predicted, on Twitter, in the early hours of the morning, and with name-calling. It is easy to dismiss this simply as a child’s ravings, but unfortunately, this man is not a child; in a few short days he will be the President of the United States.

His response to any kind of criticism is through mocking, name-calling, and falsehood. This needs to stop, and if it doesn’t stop, it needs to be called out at every turn where it affects our rights, most especially our Bill of Rights, and our First Amendment, the one that makes all the other ones possible.

The First acknowledges and legally supports our speech, our gatherings, our independent and free press, and our religion. There is no minimum age or maximum age on it. It is there for everyone, with few, very few, exceptions.

Benjamin Franklin was a member of the press. As was Alexander Hamilton, John Jay, Matthew Brady, and in our modern days, Edward R. Murrow and Woodward and Bernstein. Without the Press, there may have never been a Revolution or Constitution at all, beginning with Broadsheets to Weeklies to Dailies to Television News. Without the Press, there would have been no Nixon resignation, no disclosure of Iraq’s lack of weapons or the change from the Soviet Union back to Russia.

The Press must stand alone and independent.

Yes, ther eis a place for pundits and punditry, opinions, and editorials, but in all of that, the truth must be adhered to.

Facts are not negotiable. You can agree or not, but you can’t change them. We can’t pretend that they don’t exist.

Since becoming President-Elect, Mr. Trump has tweeted, his primary source of communication, and in tweeting, he has caused three multibillion dollar American companies to lose more than two billion dollars because of impulsive and untrue things he’s said. He’s caused a rift with China, and through his words encouraged them to take one of our technological properties in international waters. They’ve lodged a formal complaint. He’s taken the sides of Julian Assange and WikiLeaks and Alex Jones (a crackpot if ever I saw one, but of course that’s only my opinion) over the NSA and the Intelligence community that the rest of us understand to be professionals and nonpartisan. He’s continued his personal attacks on television programs and personalities, last night’s being the last egregious. He called Meryl Streep overrated. Now, I can guarantee, ven not knowing her that this does not bother her. She’s been called worse by better, I’m sure, and certainly overratedness is an opinion, but really? Meryl Streep? Overrated? I’m not sure that’s an accurate assessment of not only her acting ability, but her personal decorum and behavior.

We, as citizens of this country, and the Press need to call it out when their hypocrisy takes over.

On The Walking Dead, the character of Rick was admonishing his barely a teenager son by telling him, “Don’t Talk. Think.” I made it into an art project actually. Perhaps someone should tell the President-Elect, “Don’t Tweet. Think.” It would help the rest of us who just want to survive the next four years intact.

Supporting the Press isn’t just reading and taking sides. It’s also promoting their investigative journalism even when it goes against our own opinions. It is also donating to groups like the one Meryl Streep suggested, the Committee to Protect Journalists as well, I would suggest as the ACLU. It is also subscribing to  news organizations, print newspapers and magazines like The Washington Post, The New York Times, The Atlantic.

The Free Press needs to remain independent in order to be free.

Note: Before inauguration day, I will have a new page with links that will highlight news sources, journalists, and organizations meant to keep the checks and balance on the new Administration and the GOP led Congress. Most are nonpartisan. If there is an opinion/editorial writer or organization, I hope to label it as such.