UFYH stands for Unfuck Your Habitat. It’s a great place for real solutions to real problems of all sizes and clutter levels using real talk. This is your warning for language as you can see by the site’s name.

Some quick links, but visit the site yourself to get the most out of it.

About UFYH – as it says in this about section, this Tumblr (and related app for $.99) is for motivation, support, and accountability.
Welcome Packet

One good start is what the blogger calls a 20/10. Twenty minutes cleaning/ten minute break.

Start with small chunks and you’ll be on your way.

Good luck to getting your life (and stuff) more organized and less cluttered.

In Vintage Supernatural, I mentioned how for me, and many others who are fans or in fandom, have a broader relationship with the source material. In other words, when the television show ends for the week, it doesn’t always end for the viewer.

In the case of Supernatural, I am often also on Tumblr, reading the liveblogging and commentary from two of my friends there. It gives the feel of a viewing party, hearing (or reading) others’ exclamations of surprise, their mocking of something unbelievable. They/we applaud the writer, and gush, and we have other fans to gush with. Since I’m the only one in my family who watches Supernatural, this gives me a less solitary experience, and makes it more enjoyable to me.

When I watch The Walking Dead, I watch with my family, so we have that camaraderie and interaction throughout and after the show. I also go online and either read, write or enjoy the new gifsets that seemingly appear as if by magic minutes after the scenes air.

In Vintage Supernatural, I talked about googling the Lizzie Borden House, and discovering its existence.

A similar thing happened in last week’s Doctor Who episode, The Zygon Inversion, they mentioned a town where the action was taking place: Truth of Consequences, New Mexico. It was named after the game show according to Clara, the Doctor’s Companion.

I snorted. Can’t be true. I paused a mere second before googling it, and guess what? It’s real. It exists. Truth or Consequences, New Mexico. I learned something new.

I’ve found that I’ve been searching for terms and actors’ names and previous works while watching the show in real time. I don’t have to sit and wonder who is that guy fore the entirety of the hour. I wait for the commercial, pull out my Kindle, and hit the Google page. I avoid spoilers, but I get my curiosity satisfied without distracting me from the current show.

We simultaneously complain and applaud new technology, but using smart tech for series watching can really enhance the experience and introduce another level of fandom interaction that you haven’t realized you were missing.

It’s the best of both worlds.

For anyone else who’s interested in getting another perspective of their favorite show, here are a few of my resources:

You can also go to the website and specific page for the series you are interested in.

I wasn’t able to post while I was out of town on my family emergency, but this gives me the opportunity to remind everyone that suicidal thoughts can come at any time, and having our resources and coping mechanisms in place constantly is a must for those suffering and recovering from them.

Suicidal Awareness and Prevention is an ongoing struggle and our bad days don’t neatly fall within the prescribed awareness month.

We still need to do self check ups and check up on our friends and family who we know are at risk.

Even though this is October, here is the link to a graphic that I found helpful. Original sourcing is included at the link.

I discovered this on Tumblr, and wanted to share it with you since many of us need that little boost to get us through the day. Good luck with your today! 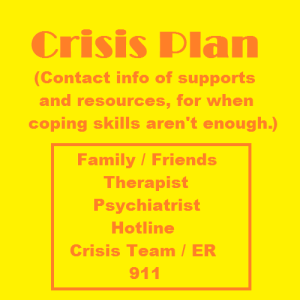 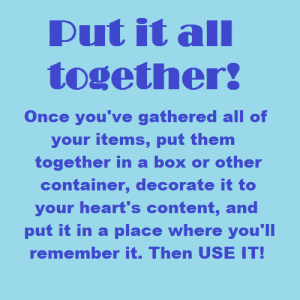 According to the Webster’s Online Dictionary, bullying is “the act of intimidating a weaker person to make them do something.” It is also defined as “tending to browbeat others,” and its synonyms include intimidation (noun), domineering, and blustery (adjectives).

In modern vernacular it happens much more than in the schoolyard for some kid’s lunch money or baseball cards. For starters, and not entirely relevant, do people still collect baseball cards?

In addition to school bullying by peers, we have adults and teachers who don’t know the appropriate responses to bullying. Often we blame the person being bullied, trying to get them to change how they do things to avoid the bully and/or the bullying behavior.

We also have the internet which is both the best thing for modern technology and information dissemination, but it is also the best place that feeds the trolls and encourages some aspects of bullying because of its anonymous nature.

Using a made up name with no affiliation to a legal name or location seems to free people’s subconscious to the point that they think their abuse of others is normal and/or okay.

We all know that many bullies have their own problems, whether it is mental illness, chronic abuse by others, or any other reason that they feel validates their abuse and bullying of others.

I think she said they would beat me up.

I went home and cried. I cried a lot.

I also think this is the reason I’ve always wanted a big brother, someone to beat this girl up so I could go on my field trip. This just illustrates the mentality of dealing with a bully; more violence. We know now that this is not the way.

Thinking back on it, she also had two friends with her: it was like Crabbe and Goyle with Malfoy from Harry Potter. She looked like Meg 1.0 from Supernatural, probably one of the reasons I prefer Meg 2.0 to the blond version. The first one always made me uncomfortable and it wasn’t until I started writing this that I realized why.

I also knew I couldn’t make a fuss.

I said I was sick. Very technically, I was sick; sick to my stomach about so many things that I couldn’t understand at eleven or twelve years old. All I knew is that it sucked, and I wasn’t precisely lying; I was truly sick.

I stayed home, and I never forgot it.

Thirty years later, I went to my son’s middle school back to school night. I came home having a panic attack and after spending about two hours talking and crying on the phone, the panic was barely soothed. I was upset for days after, on the verge of other panic attacks.

Bullying never goes away, and so when a fellow Tumblr user began bullying me last week, I became that twelve-year old again.

I tried to talk to the person, to express that I didn’t want to be harassed.

I shouldn’t admit it for the satisfaction they might get (or others), but I’m in my forties and if it could happen to me, it could happen to the teenagers here who might be less equipped to handle the pressure. I cried. Every time I turned on Tumblr, my tears welled up. It was in the back of my mind at every moment. I stayed after mass and prayed on it.

I’ve taken legal steps to stop this bully from harassing me, but it’s not simple on a public site.

You can’t stop someone from hurting you by hurting someone else.

Sure, I could leave. But why should *I* have to leave? I like it here, and I’ve done nothing wrong. Tumblr is a place of diverse ideas, diverse opinions and people say stuff all of the time that I don’t agree with and don’t like. I don’t jump down all (or even some) of their throats, bully, threaten and harass them because I don’t like what they’re posting.

That is what’s called being an adult.

But it’s more than that.

My empathic nature does have its limits. I try to live my life through Christ, but human nature is at once beautiful and compassionate and it is also selfish and egocentric. Once you crossed the line to threaten me (and this person did), you lost my empathy. I have no need to have direct contact with anyone unless they come to me first; unless they talk about me with the name calling and verbal abuse.

And a few years ago, I swore again. I promised myself that *I* would not be bullied ever again.

I would not live in fear of some ignorant, arrogant, holier than thou, knows better than me about me person, whether in physical person or online.

So this is me standing up.

And I won’t be silenced.

I just found out that this is NOT an official NASA tumblr. It is a fan site that posts photos and other information. It still looks interesting and the content seems to be exactly what I thought it was, but since I recommended it, I wanted to mention that it is not official in case something offensive gets posted there in the future.

It is family lore that I watched the Moon Landing. (I have an Uncle Neil and an Uncle Buzzy, and I was a confused toddler).

I went to Cape Canaveral, although I think it was the John F. Kennedy Space Center when I went there. I may even still have the stuffed Astronaut doll from back then.

I was born the same year as Star Trek.

I used to have the Tribble episode memorized and could recite it verbatim from any point in the script.

Space is not only the final frontier, it is a home place for me, a belonging place. Space: 1999, Logan’s Run, Lost in Space, Star Wars (the last film my family went to as a family), Firefly, any and all space voyages, it was all I wanted was to be an Astronaut.

It’s crazy and an impossible dream, but television made it kind of possible.

I watched shuttle launches instead of working.

I remember the Challenger and the Columbia. My grandfather had a framed and signed picture of the Apollo 13 astronauts.

NASA has a Tumblr.

Go there and be amazed.

(This is a thing going on at Tumblr, and I thought I would do it here since I’ll be posting my mason jar ‘deposits’, I’ve added it.)

Well, I just moderated about 90 comments and was email-bombed with likes and follows and I’m a happy camper. Thank you all! ❤

I’ve reposted the last tea that I drank of Brittany’s, and I’m planning to continue the tea posts trying out new teas. The two that will be next are Moroccon Mint (from Andy) and Ginger Citrus (a random pick at the tea shop). I expected not to like either of these and they are two of my favorites.

I also discovered that I prefer Stash’s ginger black breakfast tea to the homemade blended ginger black at the tea shop. When I run out, I will order more tea bags from Stash.

My son needed cumin yesterday, couldn’t find the ground (which we have) and used my adopted blender. I got home just in time to explain that two teaspoons whole ground up are not the same as two teaspoons ground. That was a lot of cumin (and red pepper flakes).

I will be putting this in my mason jar (picture tomorrow).

And a quote: “As you make your bed, so you must lie in it.” – English saying.

And with that quotation, I will do the activity from my Achieve Anything book and leave 2012 in 2012, although as bad as 2012 was, it brought me to better places: my continued depression recovery, reconcilliation and better place with my best friend, acceptance of my almost adult son as an almost adult, and the Church to name but a few.