Use this oppotunity to go on pilgrimage. I know that we all can’t just hop on a jet and see the world or pray around the world, but we can visit some places that inspire us to be more prayerful and draw us closer to G-d.

Lourdes is one of those places.

Today is the 100th anniversary of the Holy Mother’s final Visitation to the children at Fatima, Portugal. In the photo is a book I recently read, and a rosary given to me by a member of the RCIA team when they taught the lesson on Mary. It is from the Shrine at Fatima, and I will use it today, and on Tuesday when I participate in the LIving Rosary. (c)2017

​[Note: This reflection ended up encompassing many things: travel, spirituality, prayer, politics, and again part of my year of mercy. I hope you enjoy all that it is, and that you see the National Shrine in Fonda, NY one day yourselves. It is a very peaceful place to visit, to sit, and to pray.]

In the early part of November, just because I was in the neighborhood, I decided to visit the Shrine of St. Kateri Tekakwitha. I had a lot on my mind and in watching what was continually unfolding at Standing Rock in North Dakota, I felt helpless towards a people that had captured my imagination and inspiration since I was a child.

I remember playing cowboys & Indians. That was a thing in the 1970s. I always wanted to be an Indian. In college I chose a class titled North American Indians as my anthropology elective. As a preschool teacher, I changed the curriculum for Thanksgiving to avoid making headdresses. I added Native foods to our school’s Thanksgiving feast. Instead of the headdresses, we made more Native American crafts and listened to the drum beats and chanting of Native American music. I can still hear the cassette in my mind as I write this.

On the hill above the Shrine, I went up to the spring, but when I followed the signs to the spring, and walked through the crunchy leaves carpeting the path, I saw the way down and the supporting handrails. I could hear the water.

But I was alone and the rest of the way was steep and I was afraid I wouldn’t be able to climb back up, so I missed the spring. I chose not to go down on the slippery leaves. I still felt okay, though, because the spring was the cherry.

At the Shrine, I stood by St. Kateri’s plaque which included the dates of her veneration and canonization. I looked out passed the sign of the cross to the rustic looking buildings to the close knit trees, their narrow trunks rising into the sun. The sun was bright that day, coming down in rays through the pines. The green grass was beginning to be covered in their shedding pine needles.

The buildings themselves were closed for the season, but you can’t close the sky or the air or the land.

I stood there and I prayed. I asked St. Kateri for her intercession for North Dakota and the Sioux and their companions and their supporters. Water protectors. An end to DAPL. An end to the violence against them by more people trying to take their land. Again.

I guess you could call this a kind of pilgrimage; with purpose and spirit. It was spontaneous and it felt right and it fit in with everything I was trying to do in this past Year of Mercy. I was guided to action, something I could actually do and my heart swelled.

I prayed for peace and I prayed for resistance and strength and the outcome that protects the land and the spirit of the land for everyone who comes after us.

At the Shrine, at the Native American Peace Grove, is the following prayer:

Speak evil of no one, if you can say no

Good of a person, then be silent.

Let not your tongues betray you into

evil. For these are words of our Creator.

Let all strive to cultivate friendship

with those who surround them.

(These photos were taken on my most recent visit to the Martyrs’ Shrine in Auriesville. This is the spot or near the spot in the Mohawk village where the Jesuit martyrs were tortured and martyred. It is called the torture platform and it was covered up for repairs on the previous visit. I think this is the reminder that Jesus travels with us regardless of everything else. These were a few of my journal entries and thoughts while I was sitting there in contemplation.)

The air is cool, crisp, not cold but damp. It is just as quiet as the first time. I’ve come today for two things – to see the museums and the wayside crucifix. Unfortunately, the museums are closed for the season and the crucifix is gone – it came down last year and needs replacing.

The torture platform is out in the open this time. Easily enough sad and imposing – again, I describe this place as idyllic and pastoral but Father Jogues and LaLande, his companion were tortured there for days. We think of our parents and teachers as tortuous and unfeeling. We cannot imagine what it means to be tortured for anything, let alone our belief in Jesus.

It’s more than a duality, more than two sides of the same coin. How do I describe something so at odds with the other? Even the trees dying are filled with burning, blazing colors and that is under a cloud-filled sky; overcast, wanting to burst with rain.

You know how people say music and singing is like praying twice? What is writing then if not the same thing? Writing is often my prayer; my hug, my comfort. All things can be done with a little prayer; however it is that we pray.

I’m still not sure what to call my Shrine visit. Since I live so close, about an hour, it feels odd to call it a pilgrimage, but really what else was it? Retreats have leaders and in my mind, they last more than one day or part of one day. It was a few weeks ago that I went on a day pilgrimage to the Shrine of North American Martyrs in Auriesville, NY [Technically, it’s the Shrine of Our Lady of Martyrs]. I couldn’t believe how close it was, practically in my backyard. It is so much of what I run away from home looking for and all the things I picture a shrine should be: pastoral, bucolic, natural, historic. Should I use serene? That seems cliche but it does fit. Strolling the grounds costs nothing but time, and it’s beautiful and quiet, and yes, serene, thoughtful, and thought-provoking. It is the perfect place to think and to pray and to reflect and contemplate on anything; everything.

END_OF_DOCUMENT_TOKEN_TO_BE_REPLACED

Entrance to the Shrine

This is where I prayed the rosary 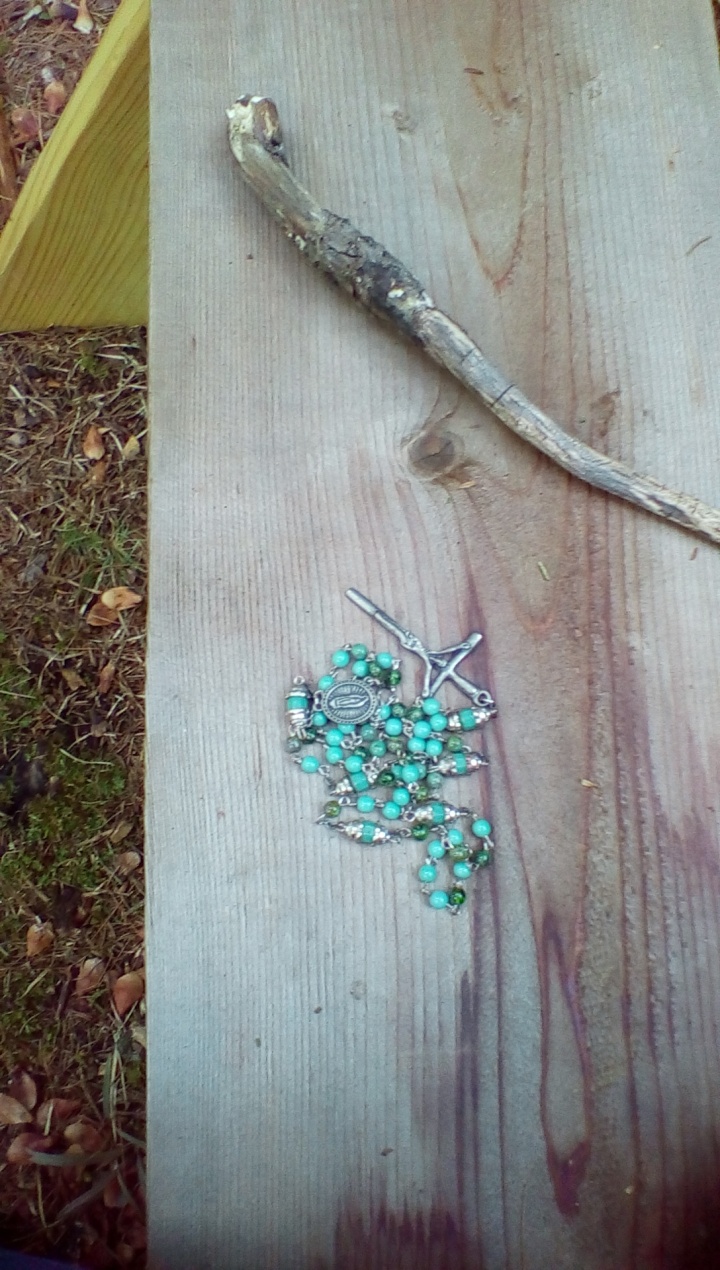 The original chapel from 1885 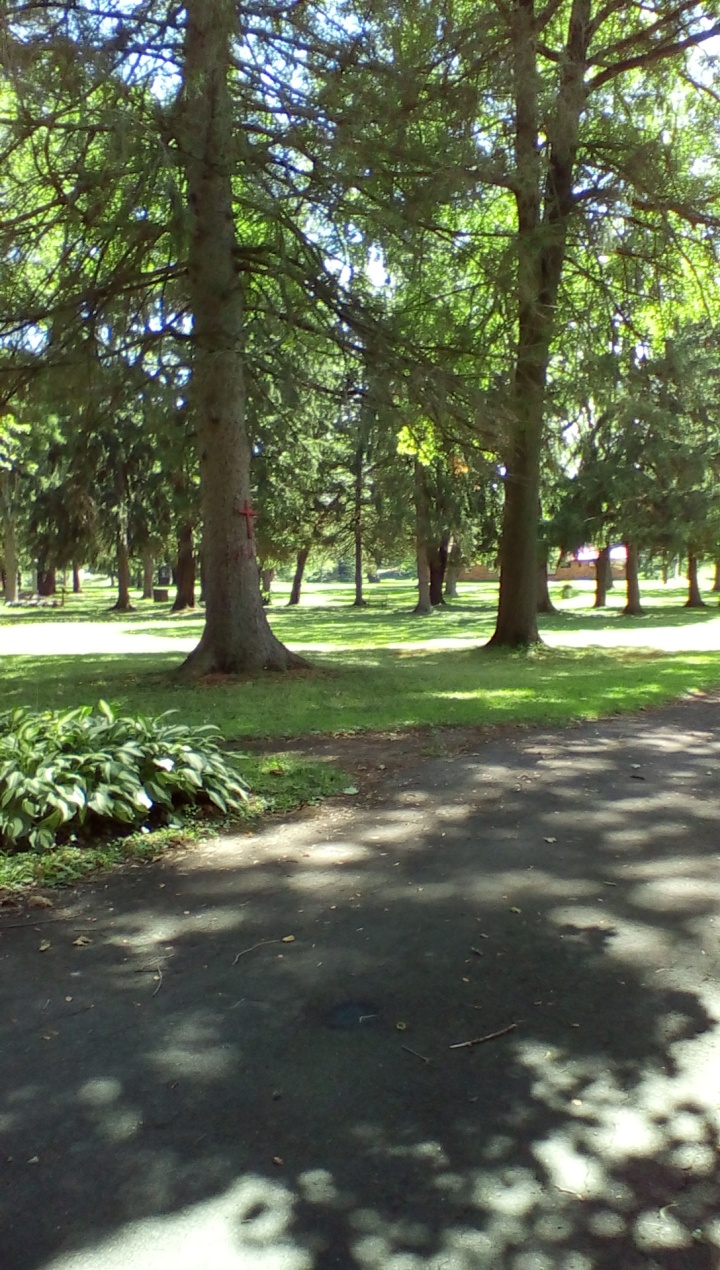 I sat here and wrote for a bit 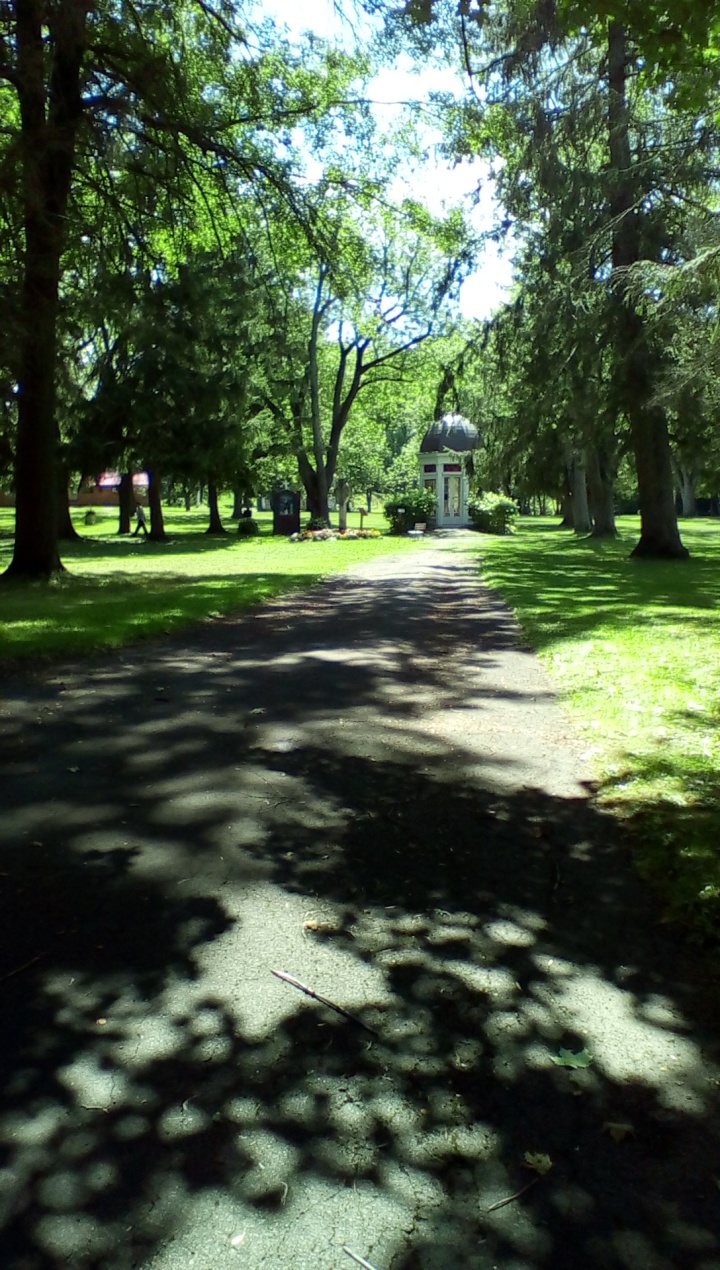 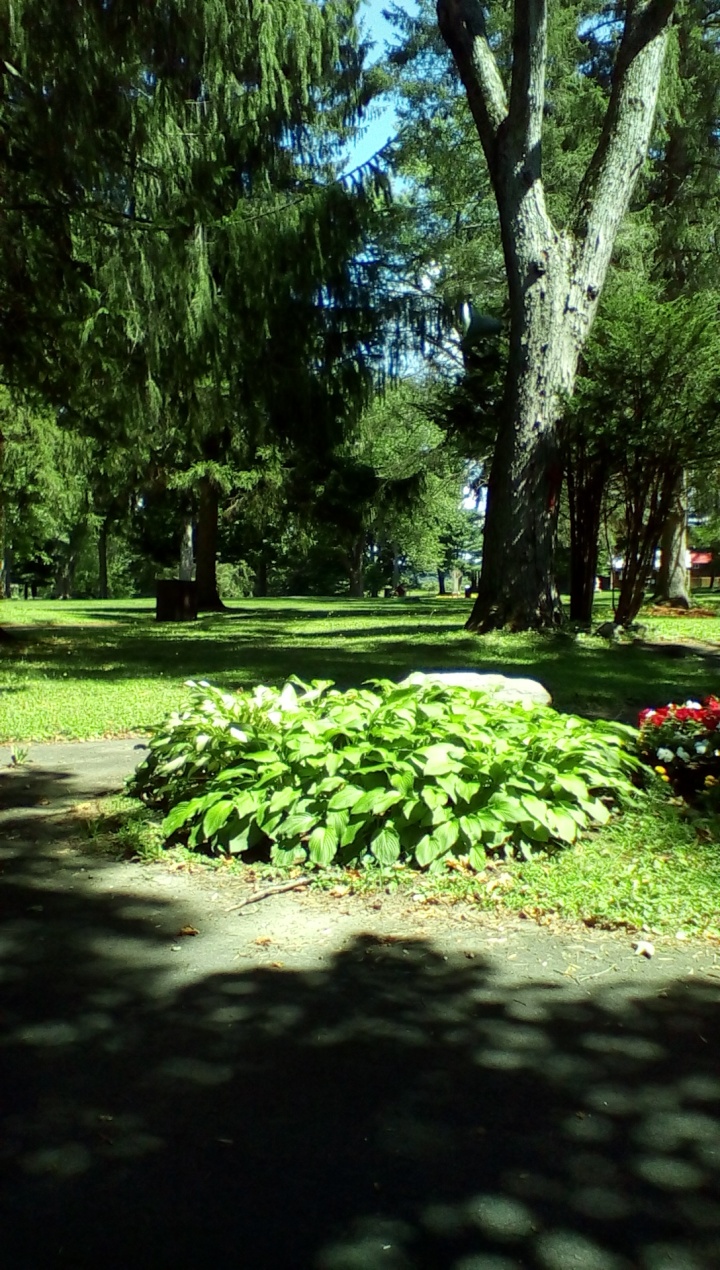 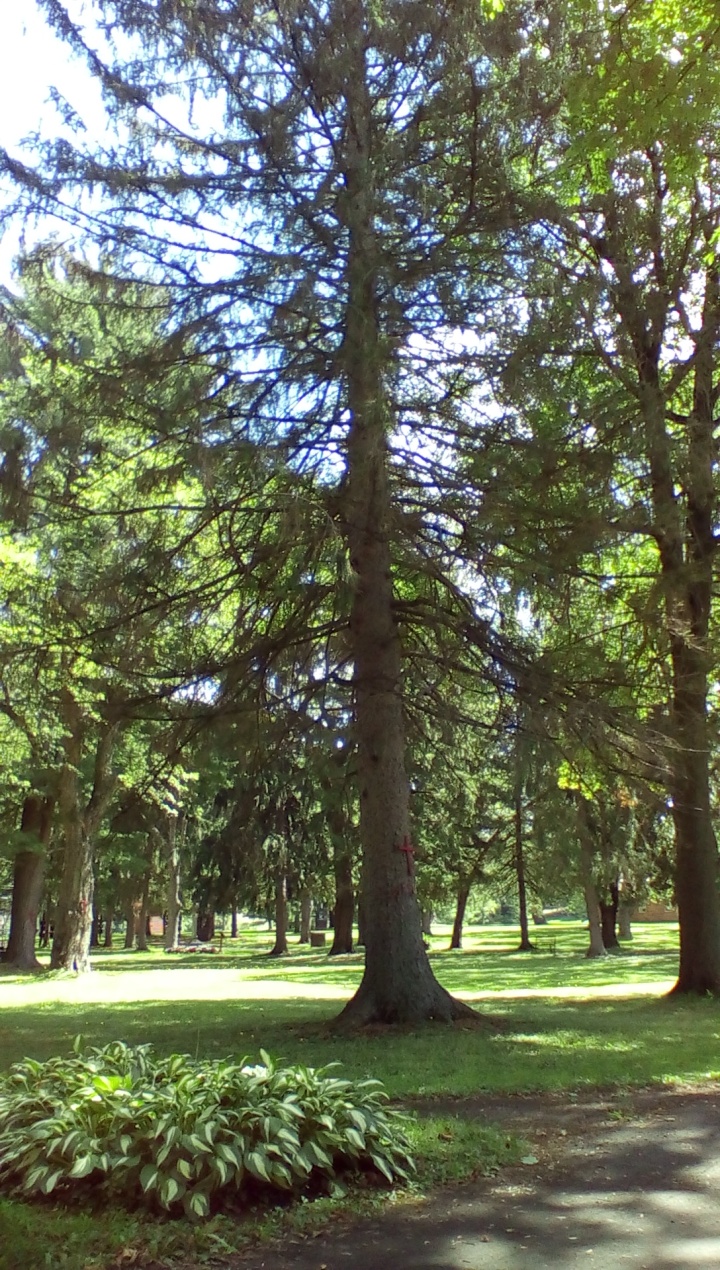 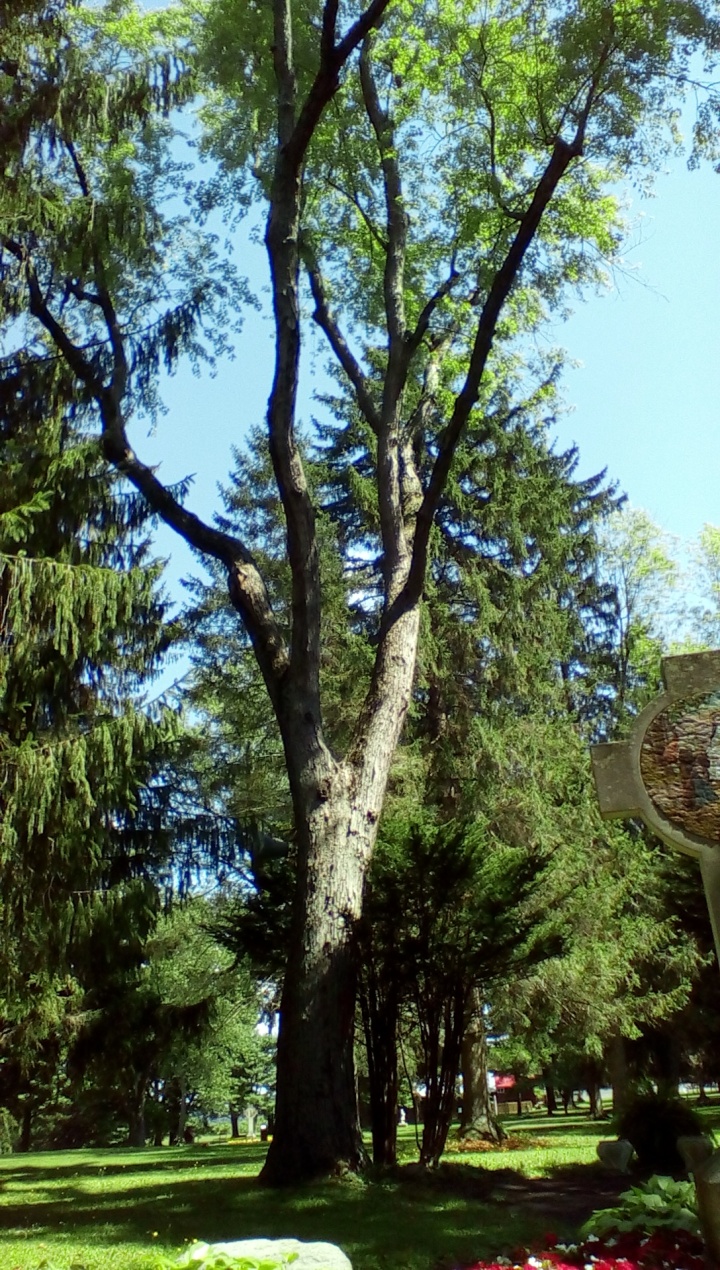