About a week into quarantine, I told my kids that we’d make bread. They groaned. We had all the ingredients – at our first grocery run before isolation I got a bag each of flour and sugar. I don’t know why; it just felt like a staple I needed like milk, bread, and eggs. I just thought I should have it in the house as if I were Ma Ingalls and baked fresh bread every morning (which I do not).

The next week, I said it again. Hey kids, do either of you have any FACS (Family and Consumer Sciences) class assignments? Let’s bake bread. They groaned. We did not bake bread.

Another week went by and my daughter asked to go to the supermarket; she had an assignment that she needed to prepare and photograph and submit for FACS. I cheered. We’ll bake bread! No, she said after she groaned; I’m making a grilled chicken salad. Fine, I said, but you need to make enough for all of us to eat lunch. She groaned again.

I watched people all over Twitter and Facebook baking bread. Some used regular rising yeast, some used self-rising flour, some used starters, mostly sourdough starter, a lot made banana bread. A lot. Why were my kids immune to the call of the fresh smell of baking bread. Sure, I could have made it on my own, but we can buy bread. I didn’t need fresh bread. I hated the kneading, and my dough was never smooth like in the photos or on the Food Network, and I wanted it to be a family project. Me and the kids, measuring and watching the dough rising, kneading like we used to do with playdoh, and then baking it at three hundred fifty degrees for thirty to forty minutes. Why wouldn’t they cooperate?

Five years ago, I would have had them. They’d put on the too-big aprons and they’d get flour on their faces, and they’d burn their fingers trying to pull bits of bread right when it came out of the oven. Five years is a long time in kid ages. My two youngest are fourteen and fifteen, and they had no interest in baking bread with Mommy.

We have to, I said more than once. Everyone is baking bread. Everyone, I whispered. Is it really quarantine if we’re not baking bread? They looked at me in that way that teenagers look at their parents – the face that is partly pity and partly embarrassment; and not of you, but for you. I let them walk away.

We were cooking at least I thought with a shrug. We made pasta, Chef Jose Andres‘ Angel hair with tomato sauce (he called it pomodoro), chicken Alfredo, meatloaf, homemade meatballs, lasagna, roast chicken, pork in orange sauce, even my own leek and potato soup.

And still no bread.

I have a friend in Oklahoma who made a starter and offered it to her friends, like a chain letter. You get the starter, you grow it, and then, after ten days, you bake your bread, and you share the rest with your friends leaving one cup for you to continue the starter or freeze it for when you’re ready. for more Hmm, I thought, sure why not.

About two weeks later, a small postal box arrived at my doorstop. My starter was here! This was day one, and the directions couldn’t have been easier: do nothing.

I can do nothing.

For ten days, I mix the starter in the bag and I feed it twice. At the second feeding it’s ready to divide and use.

I put on my red apron, I got covered with flour because really what choice did I have – that stuff gets everywhere! One of the best parts of this type of bread is that apart from the starter, I already had every ingredient in my house.

I mixed it smooth. There is no kneading; it has a batter consistency and it poured into the loaf pan easily. I covered it with cinnamon sugar, although I feel as though in the end I should have mixed the sugar with butter to give it a streusel-style topping. I will try that when I make this the next time, and I will definitely add my results in here with an update (but not for awhile). I baked the bread on Wednesday, and I still have a full half of a loaf left. I think my family hasn’t figured out where the bread is or it would be gone already.

Apart from the community of what seems like the entire world baking bread simultaneously, the act of baking the bread is its own therapy. It brings out the homesteading, the nurturing, the nesting that just naturally happens in days of trauma, especially this shared trauma we’ve been facing. This feels different, though, maybe not as natural as other moments, and there is a level of stress and an undercurrent of fear sitting on the surface; the unknown that awaits. Like a rising tide lifts all boats, bread rising is an act of faith. You can follow the directions, mix all the ingredients, knead and rise, and it works or it doesn’t. Sweet breads are a little different, but there is still the wonder of making something from your hands and then sharing that with the people around you, whether that is physically with your family or here online with the people who make up our community.

I got the starter and I followed the directions. I added the ingredients. I mixed. I poured. I spread. I baked.

It hadn’t taken much for the house to smell like a bakery. A little cinnamon and vanilla goes a long way. The smells combined with each other – the cinnamon mixed in with the vanilla – and then it spread throughout the entire house until it was just there; it was consoling, comforting. It calmed. It’s quiet work reassured that things are okay and if they’re not okay right now, they will be. They will be.

Twenty-twenty’s been a year, hasn’t it? We’ll get through it in our own ways and yet still together.

It will take time, but we’ll be okay.

And there will always be bread.

For anyone who wants to make this bread, this is the link for the ingredients and directions as well as a few photos from my baking venture. 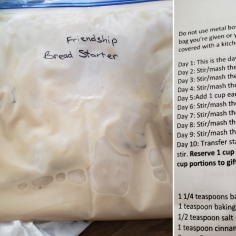 Day 1. Starter arrives with instructions. Do nothing. (c)2020 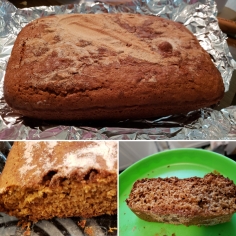 One thought on “Is It Really Quarantine If You’re Not Baking Bread?”