National Pretzel Day!
A quilt square/ prayer square from Saturday's retreat. Look for a future post describing the symbols I used.
UK National Tea Day
Another gorgeous grilled cheese. This one is pepperoni and mozzarella cheese on Italian bread and I used garlic butter for grilling with a side of marinara sauce. Delicious.
Early Earth Day.
2nd Dose!

Halloween is one of my favorite holidays. I tried so hard to find a picure of when I was a kid in the plastic Princess costume – it may have been Sleeping Beauty – but I could not find it. It’ll probably turn up around Christmas.

That is the first costume that I remember wearing as a kid. I have no real memories of other costumes until high school when I went as Oscar Madison one year and wore my Dad’s Army uniform another. Someone shaving creamed my back while I was wearing that and I was so pissed off because I wasn’t supposed to get it dirty.

Over the years, I’ve gone to several Halloween parties, some with themes like science-fiction [I was a Bajoran civilian from DS9] or superheroes and villains [as Poison Ivy].

For a decade I was in a medieval re-enactment group so every weekend was Halloween, only historically accurate.

I remember going through the drive-through at Burger King or Dunkin’ Donuts in full medieval regalia where I would get some odd looks. I went into a 7-11 once to buy soda.

Our friends have a summer family reunion that is a costumed event. Last year, we were pirates and cowboys the year before.

Gishwhes has also afforded me opportunities to dress up, most memorably as Batgirl, an homage to Yvonne Craig who had recently died.

Any excuse to dress up and have fun.

This year’s costume, as journalist/press person, is my first, perrhaps only politically charged costume.

This year, my middle son is a pink dinosaur person with a spear, and he is the happiest little kid in the world. He can’t wait until after Halloween because the pink dinosaur costume is also pajamas, and he will probably wear them every night this winter.

My daughter is Harley Quinn from Suicide Squad, and she is using all of her own clothes. Resourceful, and…a little scary. She decorated an old wiffle-ball bat and I put the makeup on her, and it is perfect.

This is what Halloween is. Kids and fun and candy, of course. This year, we’re also giving out toys and Halloween pencils that we had around the house, leftovers from a school party or McDonald’s happy meal. We did this last year, and the kids were so thrilled to get something like that.

The school parade is in an hour – my daughter’s last one in elementary school; then no more school Halloween parties. It is the end of an era.

High school was a time for friends and music and concerts. I still feel the ramifications of standing too close to a speaker in a closed building listening to The Stray Cats. Now that was an experience and an amazing memory.

There was Berlin, the Thompson Twins and others, but none more important to my life as the five Brits known (and still known) as Duran Duran. Named for Doctor Duran in Barbarella. With their hair and their makeup, their synth pop. The three unrelated Taylors, Nick Rhodes, and Simon LeBon creating music that was danceable and singable, but also moving and inspirational, a creative catalyst for my writing and exploring what was barely in my mind’s eye, but that wanted to come out in ways.

My friends and I would go to the park, climb up on the big stage at the amphitheatre. They would play their air instruments, and I would take their pictures using my air camera.

Click, whirr is the sound a camera makes, and I was the paparazzi following them on tour.

We were 100 Club, and we opened for Duran Duran. We wrote creative fiction, not song fic, maybe closer to fan fiction. Mine was a murder mystery – Murder at the Odeon. and it was my second moment of fandom and writing colliding.

Duran Duran also contributed to our creativity with their videos – The Chauffer, Night Boat. Their videos told stories that encouraged us to tell our own stories.

My current text notification is Late Bar, one of my favorite songs from them, conjuring up holes in walls, drinking, and mystey. It influenced a poem I wrote for the yearbook called Spies, which in turn encouraged a new Dungeons and Dragons game that was called Top Secret that was role playing for secret agents and government spies.

Their Hungry Like the Wolf was very much like Indiana Jones and New Moon on Monday reminded me of those undercover agents sneaking around foreign lands.

Thirty odd years later and I still listen to them. They remind me of high school, and college but they also fill me with new bouts of creativity and writing inspiration.

These are not in any kind of order, but I will caption them so they can illustrate some of my fandom activity and this is just the tip of the fandom iceberg that so many of us participate in.

As you can see, these are some of the more elaborate activities that we’ve participated in over the last few years. Posting these have brought a smile to my face in that nostalgic way that reminds me of the fun, and is excited for the next adventure in fandom!

This is my phone lock screen in honor of season 10. 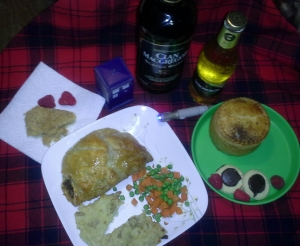 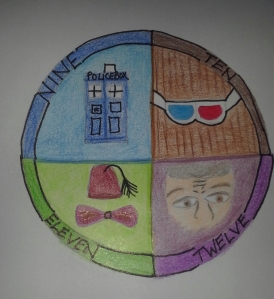 My drawing symbolizing all of the Reboot Doctors (Nine, Ten, Eleven and Twelve) 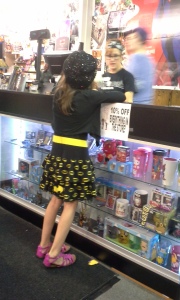 Fangirls Night Out at the local comic store

My desktop wallpaper on my computer. Supernatural, season 9. Men of Letters Bat Cave

Zombie Crawl, Denver, 2011 (or when fannish people get together). The baby is not ours. Mom wanted our picture.

British (Welsh) tea “service” brought to me in bed

Buying Jiffy Pop because the preview of the episode shows a character eating it.

Owning (receiving as gifts) ridiculous amounts of stuff. This is a sonic screwdriver from Doctor Who. This belonged to Nine and Ten. I carry it everywhere. It’s a flashlight, and during blackouts we have this and our Green Lantern power battery to help out.

Participating in an actor’s personal charity. This one does Random acts of kindness and promotes kindness and creativity. 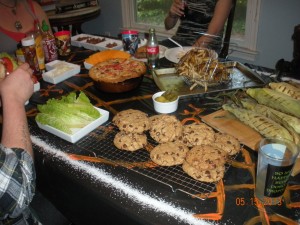 Traveling to Williamsburg, VA (twice) for the season 8 finale and the season 9 premiere parties of Supernatural.

My costume for the LARP (live-action role play) prior to the season 9 premiere party of Supernatural.

LARP – some of us in costume.

After the LARP watching the premiere 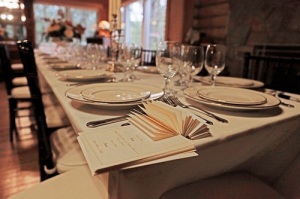 Formal dinner set up for the Men of Letters, 1958 – Supernatural LARP

Party Favor for the LARP. Salt, angel feather, key to the MOL headquarters and leather engraved symbol in a diner salt shaker. Really perfect. My friend, J. made these. They were beautiful.