Apparently, I had the wrong date in my planner and this makes me sad. My kids, my son especially have had an obsession with otters for several years now. There is a beaver near where we live, and for the longest time, my son called him an otter. When we explained that it was a beaver, he continued to call it an otter….or a skinny beaver. We see him throughout the spring, summer, and part of fall.

When my daughter and I went to Florida a couple of years ago for my aunt’s 95th birthday celebration we went to Flamingo Gardens where we saw real, live otters. We were so excited. They were enthralling.

Two years later, this past February, right before the pandemic, my son was able to go their with my husband and see the same otters. He was thrilled.

I thought I would share this video that I took in 2017, and I also wanted to encourage everyone to check out the work of the International Otter Survival World Fund (IOSF) and donate if you can.

Lin-Manuel has teamed up with Ben Platt and arragner Alex Lacamoire for this beautiful mashup of his The Story of Tonight from Hamilton and Dear Evan Hansen’s You will be Found to raise money for combatting gun violence. A portion of the proceeds from every sale of this MP3 will go to March for Our Lives.

This is a subject that is close to my heart. My personal connection is minimal – my daughter is the same age as the murdered children at Sandy Hook, and my cousins attended and had graduated from the Marjory Stoneman Douglas High School in Parkland, Florida. I believe in gun control, but more importantly and more universally, I believe in not only being safe, but feeling safe.

For the rest of Lin-Manuel’s Hamildrops, new Hamilton mixes dropping each month, go to Hamildrops.

You can buy this MP3 from all major music sellers. I use Amazon. You can also donate separately.

Neil Armstrong and Buzz Aldrin became the first men to walk on the moon with Michael Collins supporting their mission from the capsule.

My parents tell me I watched it on television, and I have vivid memories of visiting the Kennedy Space Center as a child. Space has always played an important role in my reading and television watching life from Star Trek to NASA to the Challenger to Pluto’s return as a planet with amazing photos.

Originally posted one year ago today, I thought I would reshare it along with an additional anecdote that is part of my family’s lore. We all have those apochryphal stories that may be slightly embellished but it’s been so long that no one remembers where it came from or started.

My parents tell me that I watched the Moon Landing when it happened and despite being only two and a half years old, I was very much engaged in what was happenening on the television.

I have two uncles, both my father’s brothers; one named Neil and one named Buzzy. Upon hearing the astronauts’ names, I thought my uncles were the ones landing on the moon and pointed at the TV with as much excitement that a toddler can muster.

Another moon related family story is actually a piece of memorabilia that my grandfather had – a signed photo of the Apollo 13 astronauts with a flag that went with them on their misadvernturous trip to outer space. We still have this framed bit of history on my son’s wall, or at least that’s where it’s supposed to be. Photos at another time.

Somewhere in my assorted boxes, I have a doll-shaped, doll-sized, astronaut pillow from my family’s visit to the Kennedy Space Center. I loved that thing.

We also grew up near the Cradle of Aviation, Roosevelt Field. Long before the museum that is there now was there, there was a much smaller version, like old space equipment in an airplane hangar, warehouse-style that we took our class to. We played on the replica Apollo capsules and wandered around, learning about space exploration. It was a fabulous adventure.

A trip to the Smithsonian’s Air & Space Museum during their Star Trek exhibit in the early 90’s gave me the once in a lifetime chance to sit in the Captain’s Chair from the original series and use the transporter.

These are memories I will cherish and long before digital cameras, so I can’t readily access them to share with you. It does give me incentive to get into the basement and sort through some of those boxes, though.

When I was a kid I was lucky enough that my parents took my siblings and I on many family vacations. I learned history on many of these trips. We visited family in Toronto, Canada, and Fort Lauderdale, Florida. We also went to Niagara Falls, the Ontario Science Center, and Disneyworld. We were really lucky. A few of the other places we traveled to on our East Coast adventures were what you might call kitschy or roadside attractions. We never saw a great ball of twine or see Area 51 or even the Corn Palace, but we went to Amish Country, the Fountain of Youth, South of the Border and Zinn’s Diner (now closed). I remember the last two vividly. South of the Border was like entering into a fantasyland filled with neon lights and fireworks stands. The giant man in the sombrero was even more gigantic to small children, aged 4-8. 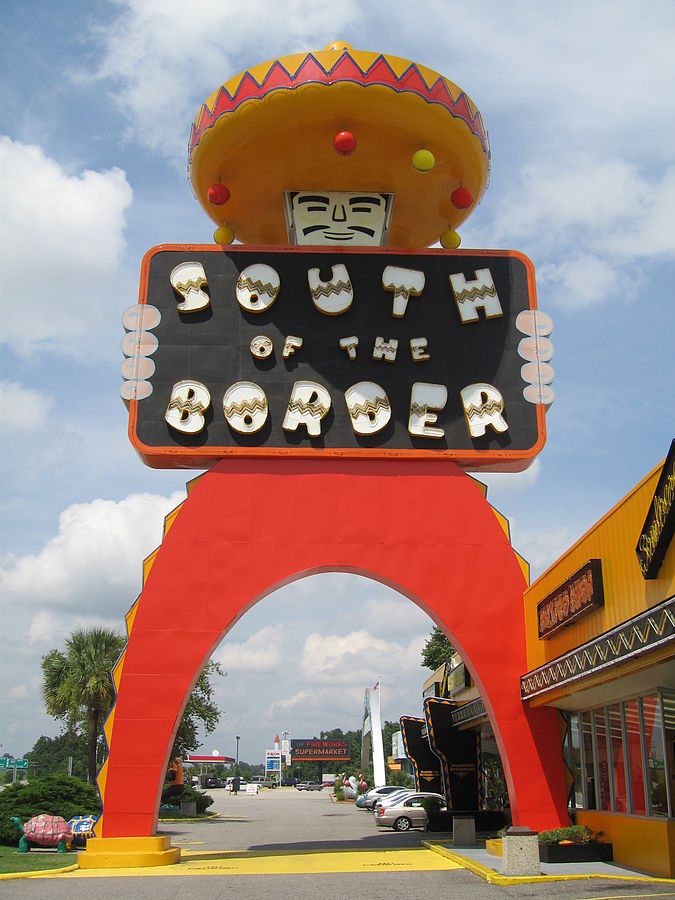 The Disney/Pixar movie Cars reminded us of those things found on the road trip of following Route 66, seeing things that couldn’t be seen anywhere else, and I thought about my childhood of road trips both north and south. Everyone should see at least one ridiculous roadside attraction in their lives, and if they’re lucky, they should see many more.

Here are a few suggestions and resources:

Things You Will See on a Road Trip Across America

South of the Border

Niagara Falls – not so much roadside attraction, but a can’t be missed world wonder