With the new day comes new strength and new thoughts.

What you do today can improve all your tomorrows.

Despite the new year’s beginning in January much like the old year had ended, we got through it. We inaugurated Joe Biden and Kamala Harris as our President and Vice President, and they hit the ground running.

Using Executive Orders to reverse some of the most heinous Trump Admin policies, reorganizing the Covid relief response so that it works for the American people, the Press Secretary giving daily briefings, answering all questions without lies and hedging, avoiding talking points and giving out real information has been a wonderful change of pace.

See the previous post for many of the Biden Admin Twitter follows to keep up on their news!

I’m optimistic as we head into the shortest month.

Lent is early this year, at least it seems that way, and so I’m already thinking about those forty days in the desert. You don’t have to be Catholic to think about the things that Lent brings out in many of us. Choose a random day, and begin your own forty days.

What direction am I traveling in?

I just finished an essay for my memoir workshop’s annual journal. Our theme was centered on the roads in our lives, and it struck me at how many of those roads converge throughout time. Roads are everywhere, and at this time of the year, as the leaves are covering them and darkness comes earlier, do we stay on the same track or wander off? As the year closes, and a new monthly series opens today, I am in constant wonderment of where I am heading and that makes the simple question of what direction am I traveling in that much less simple.

On a recent road trip to see the in-laws I began to read Eleanor Roosevelt’s autobiography. I never remember that she and President Roosevelt were from New York, and so while reading it many of the places she mentioned were familiar to me: the capital of Albany, of course, GE in Schenectady, etc. I also never remember much about her other than that she was a strong, independent woman with a life apart from her husband’s. What struck me as unexpected was her description of herself as painfully shy, introverted and lacking in initiative and self-confidence. I think I literally laughed out loud. Even in my ignorance, I would never describe Eleanor Roosevelt as shy or lacking self-confidence.

Quite suddenly while we were heading back north I realized how close we’d be to Hyde Park, President Franklin D. Roosevelt’s family home (and now Presidential Library and Museum). I mentioned that I wanted to drive by, maybe walk around a bit and take pictures. It’s not far from our route, so it was no problem to divert for an hour or so on the way home.

When we arrived in the hamlet of Hyde Park, I looked for signs to guide us to the President’s home. I was excited, diverging from our planned itinerary for some local history. We followed the main road and then I saw something that would change our intended destination: a sign for the historic site of Eleanor Roosevelt’s home. The autobiography hadn’t gotten to talking about Val-Kill until after we left, but I’ve always admired Mrs. Roosevelt and decided that I would like to see the home of one of the smartest, independent, and inspirational heroes of the twentieth century.

I had already decided that I wouldn’t take the time to take the guided tour (the only way to see the inside of the cottage); it would take more time than I was willing to sacrifice, and I didn’t want to spend the money for so short a visit. My daughter wanted to accompany me, and I was really excited to include her. My daughter is her own independent, speak-her-mind, interesting, spirited young lady and Eleanor Roosevelt’s name is one that I’d like her to remember.

We wandered down the path (1, 2) and over the wooden bridge (3) taking photos along the way. There was a little door in the side of the hill with rock walls as tall as my daughter bordering it. (4) We took some more photos and she stood on top of the wooden deck slats.(5) She peeked between the slats and said that it was deep and empty. We walked around the cottage and down into what I presumed would be a very pretty fenced garden come summer time. (6) There was an outdoor fireplace. Coming around the back of the stone cottage there was a white wooden fence surrounding a courtyard with another outdoor fireplace and a cherub statue that might be a fountain when it’s not so cold as to freeze. (7, 8, 9)

We looked in windows and over walls. We wandered through puddles and muddy paths, kicking rocks and listening to the water as it rushed under the bridge. My daughter tried to tug open the locked cellar as she imagined what treasures might be hidden down there. (10)

This was a unique travel moment that one can only hope for. Not only was I surprised that I thought of it before we had traveled past it, I was surprised that I followed through. It’s not as though I would have driven the two hours on just any weekday, although now that I’ve been to the place I might want to go back and take the actual tour.

Continuing to read the book after we left Val-Kill, I discovered through Eleanor’s words that she came here to live after Franklin died; subsequently giving their Hyde Park home to the government for the historical site, library and museum. This became her year round home, not the vacation retreat she enjoyed with her husband, and she did much of her work from here. She also spent time with her family and enjoying the solitude of the surrounding woods as she continued her writing and political work. I loved finding out that Franklin Roosevelt had contributed to the design and the building of this cottage. I put two and two together and found that the wooden slats that my daughter had been standing on was the swimming pool that the President enjoyed as part of his visits to Val-Kill and as part of his therapy and exercise for his legs after contracting polio. (5) Recognizing things there and from photos that I looked into from her autobiography really made this site come alive for me.

One of the best things about travel is the parts that come alive. I can picture Eleanor sitting in a chair with the stone cottage in the background behind her, the windows of the house open to let in the cool air from the stream and the wooded areas. I can hear the birds whisling, the water rushing, and the bees buzzing from flower to flower. I look around at her home and special place and I think iof how to maintain my own places and keep them special and where I can surround myself with the sounds and the scenery that will continue to inspire and give me that sense of stillness that I often seek.

Other Roosevelt items of interest include:

The Culinary Institute of America, where the burial site of Pierre Teilhard de Chardin is

A Tour of the Roosevelt Family’s New York 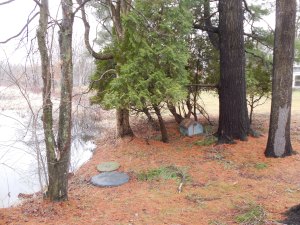 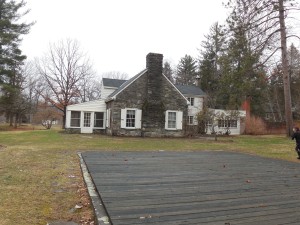 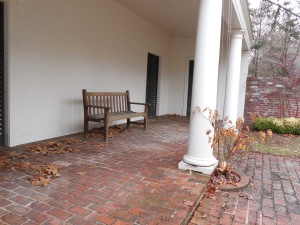 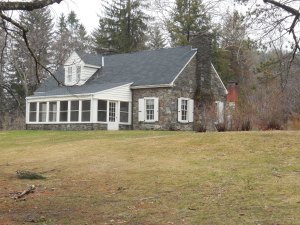