On Tuesday night, my church held a Living Rosary. There is music with our organ and the choir. There is a candlelit procession of all the beads on the rosary. There are prayers, and the benediction of the adoration that’s been in the church all day. It is a wonderful, faith filled, and beautiful tribute to Our Mother, Mary. 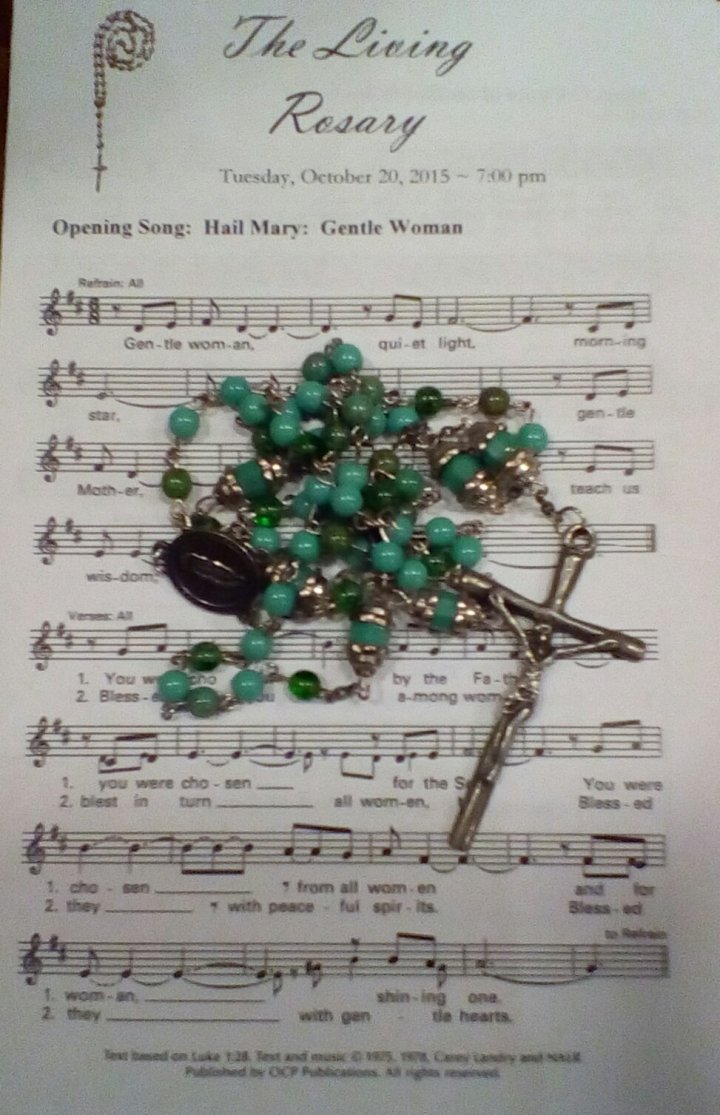 There is so much beauty in candles being carried into a dark church. The organ playing, the choir and congregation singing. And then the rosary being spoken as I pray on my own beads.

The Glorious Mysteries were read and prayed on:

There is so much to admire about Mary. Her acceptance of G-d’s will, her bravery and determination to walk on a path that was so foreign to her and to the times in Ancient Israel. Often people look at her as a background figure. The Bible is filled with Jesus’s deeds and Words, but not so much of Mary’s. That’s fine, but we forget that his public ministry began when he was thirty. Prior to that, he was just a boy; a little Jewish boy growing up and doing the things a boy at that time and in that place would do.

He’d have friends. He’d play with them. He’d learn carpentry from Joseph, his father. He’d learn to worship and pray. He must have had chores. Did he make his bed or tend the sheep? How often did Mary have to remind him to wash his hands or shake the dust from his sandals. Did he have to prepare the table for eating or did he help with cooking. Or lighting the fire?

In the so many ways that He was different from us, he was also the same.

After the candlelit rosary, Father J talked about Mary. He began by mentioning Pope Francis’ devotion to Mary and how it began in Germany when he was a student. I began to smile. I couldn’t help it because I knew this story. This is my favorite devotion to Mary. Pope Francis grew attached to a stained glass and a painting in his church. Before I knew of his devotion, I had already formed my own to Mary, Untier (or Undoer) of Knots. I carry that particular prayer card in my purse daily, which I showed the father after the service. 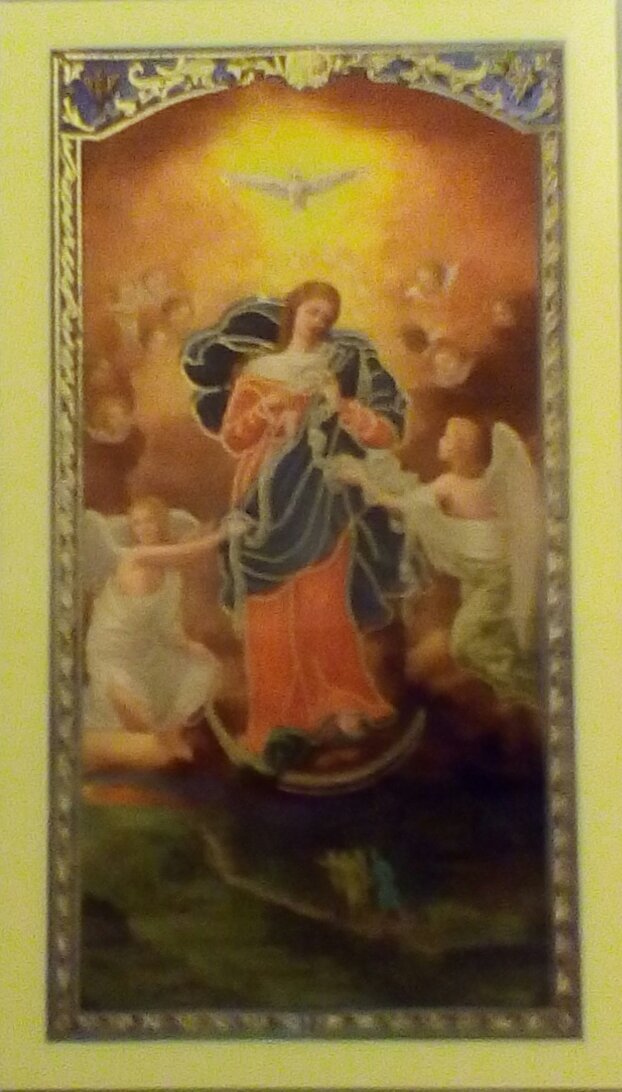 Mary, Untier of Knots speaks to me on so many levels. I do especially think of her when in the very tangible job of untangling my daughter’s necklaces, but also in the broader spirit of fixing things.

Everything can be fixed if we try at it long enough. We can pray on it; we can think on it; we can ponder and ask questions and sleep on it. We all have knots in our lives. How will we pay that bill? My son is sick, what can I do? I had a fight with my spouse or my child; or my parent.

The knots of our everyday need untying, and Mary can help us with that through her intercession.

Anything that can be done, can be undone.

There is nothing that can’t be forgiven.

I had a ten minute conversation on where I wanted to eat lunch, most of that with myself.   I finally decided on Cracker Barrel. Good food, reasonable prices, good atmosphere for writing. I have my rituals for pretty much every place I go. Cracker Barrel is a glance around the store and a trip to the bathroom before I get settled in my seat with whatever I’ve brought to do. Today it was my kindle and keyboard.

END_OF_DOCUMENT_TOKEN_TO_BE_REPLACED

My church has a twice yearly Anointing Mass for anointing the sick. It is also called a Healing Mass. Everyone is welcome whether for a physical or a mental ailment. Many of the neighboring nursing homes and assisted living centers bring in their residents for this special mass. This was my third one. I go for both my depression and my knee pain.

Obviously this is for people of the Catholic faith, but belief or not I still think it is a wonderful experience of community and sharing our joy which halves our pain*. Seating is every other pew so the priests can move through to anoint and offer the Eucharist.

The Mass is followed by lunch. I usually attend alone, so it’s always a surprise who I will be sitting with. So many people go to so much trouble, cooking, setting everything up, decorating. There are prayer cards and a favor to take home. One of the volunteers makes them. They are so thoughtful and creative; it makes me want to go home and create something.

In yesterday’s writing, I mentioned having an object to help with meditation and contemplation. Today we were given a small medal with a cutout of a cross. I have been given this week’s object, I see. 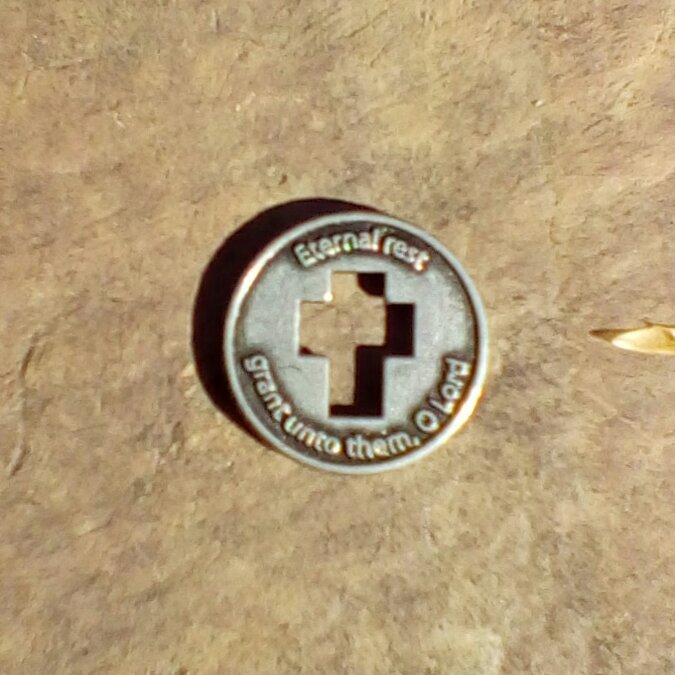 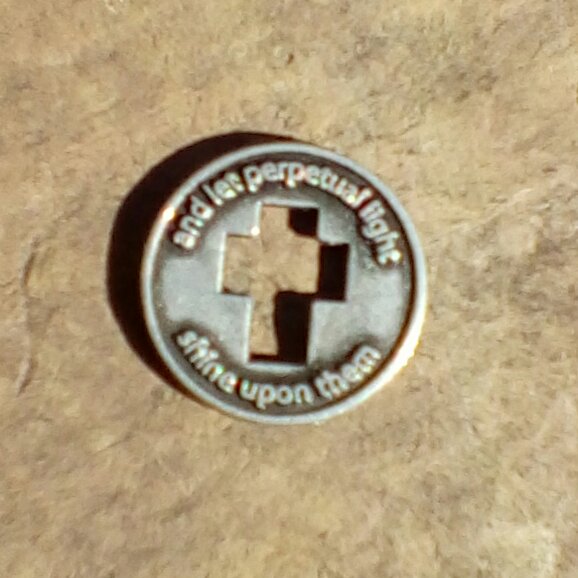 I encourage you to look up today’s readings. They are always a link from the past history to our daily lives. One of the things I enjoy about going to Mass so often (usually four times a week) is that despite the words being thousands of years old, they still speak to me. I relate to them on a regular, almost daily, basis. 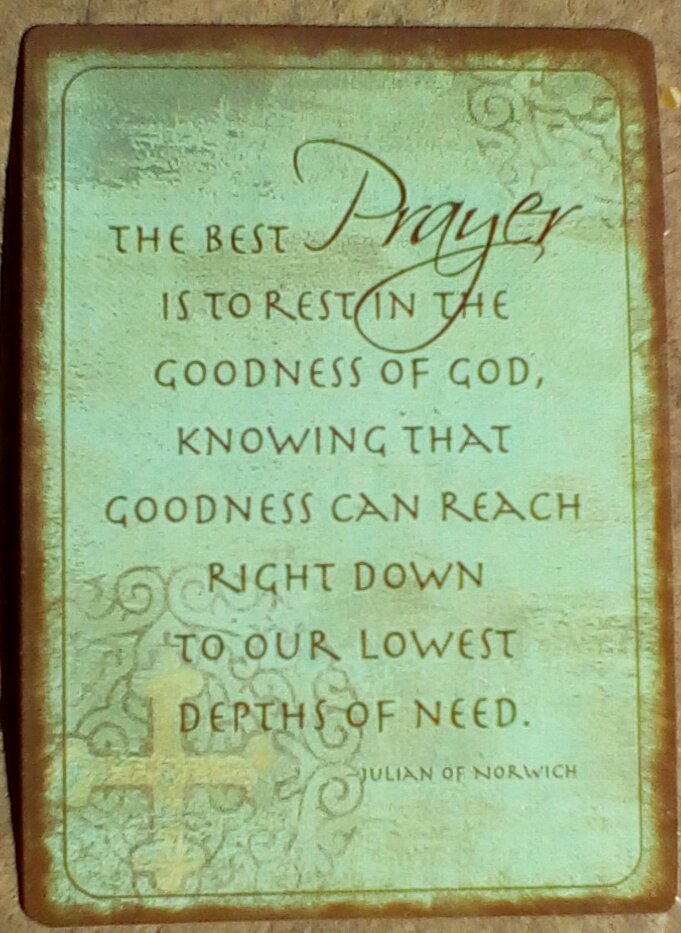 Julian of Norwich is one of my favorite mystics. Her work is said to be the first one written in English by a woman (1395).

One of my favorite of her quotations struck me when I first heard it. Ironically, when I am in a pessimistic mood, I will still often say that everything will work out; it will be okay.
Her words:

is so close to my own sentiment that I did a double take the first time I heard it, which was appropriately at my first healing mass. 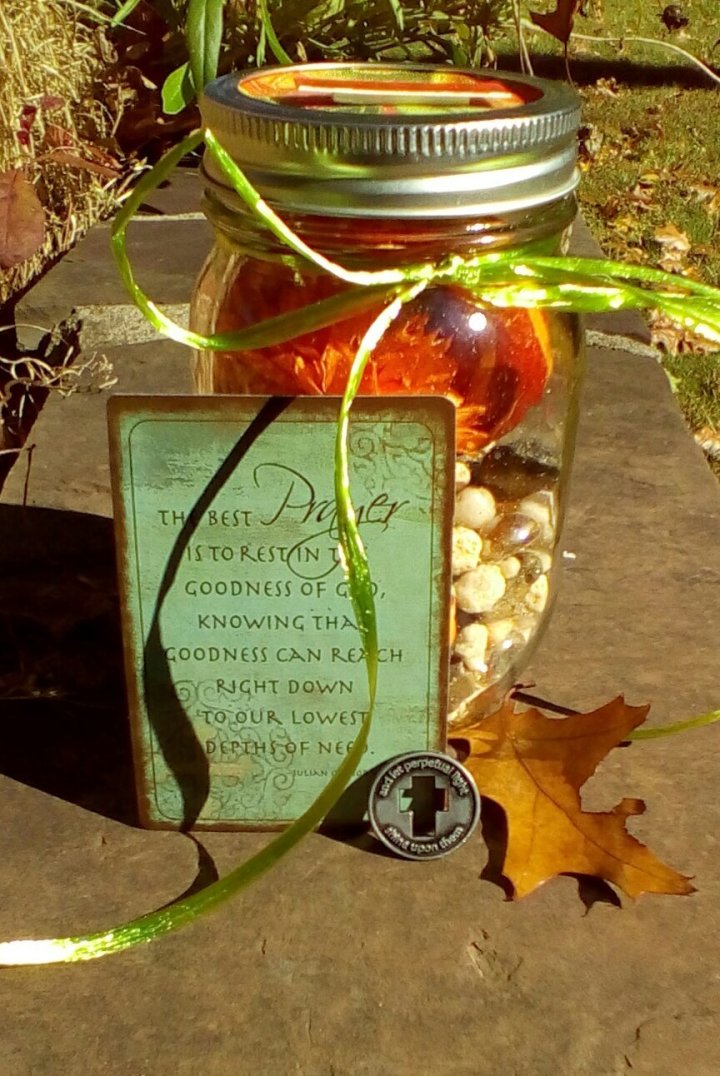 [Borrowed and paraphrased with permission from Dumbledore’s Army and the Year of Darkness.]

My family went away this morning and have promised to return before The Walking Dead’s second episode of the season. This is probably the first fall television season that we’re watching so many shows as a family. Our oldest son usually skips out, but he did spend six weeks with us watching the premiere season of Fear the Walking Dead. Considering that he doesn’t watch the main show anymore,  this was quite an achievement.

Well, it’s retreat week again. It’s funny how it always seems to fall during this week in October. I really don’t plan it that way. I make some kind of a preliminary plan of activities, and when I look at the calendar, it’s this week again. It seems to have moved from psychologically necessary for my mental health to traditional week that is necessary for my mental health. Regardless of the changes in my reasoning behind the retreat, it is still important to me, and a necessity to keep me going until the next retreat.

My retreats vary from writing to spiritual to creative to a combination of all of those things.