​Last year I was all gung-ho about Advent. I think it may have been the first time I had a real understanding of what it was all about. Coming from secular Christmas to religious Christmas took me from the Santa countdown to the more solemn, restfulness of Advent. Or is it restlessness? Having the excitement build without the harriedness of worrying about presents or stockings or dinner was a true revelation. All of that will manage to happen regardless. The realization that Christmas could be had without the crazy or at least with a lot of the crazy at bey was eye-opening and very satisfying.

This year however is, I don’t know how to describe it. I’m not ambivalent and i’m looking forward to the next few weeks of anticipation. I have a wonderful devotional book written by an acquaintance, and three days in, she’s expressing what I’m feeling, but there’s something missing. Is it because my house is a mess? Is it the constant noise of the kids? The never ending “what’s for dinner”, the ‘are we there yet’ of the weekday.1

I wake up each day unsure of what i want from the day. If I don’t attend the 9am mass for whatever reason, I typically don’t do morning prayers. It feels odd to me. I don’t know why that is. It may have more to do with how I’m perceived in my house.l Could I just simply go downstairs each morning, light one of my scented candles, hold a talisman or my rosary and give myself over to G-d? It feels foreign. It sounds so simple and yet in my mind it feels impossible.

I’d be interrupted. I’d be questioned. Not in a terrible, judgmental way, but starting something new is the impossibility. Seemingly.

Spending a few moments in G-d’s presence shouldn’t be.

I could try it out tomorrow, couldn’t I?

Instead of beginning my day with Facebook and Instagram, emails and Twitter as I usually do, instead of bemoaning the state of affairs of this country, perhaps I could pad downstairs, boil some water for a cup of tea, light a candle and read the two minute devotional. When that’s complete, I can read the day’s Scripture readings. Then just sit for a time. Finish up with the rosary.

I think that sounds like a plan. Maybe that’s all I needed – a plan.

I tend to be self-defeatist. It’s too late to start. I started late so what’s the point? Advent is only four days in (at this writing). There are still eighteen days to go. That’s more than four-fifths of the season.

As you read this, today’s Scriptures are:

A few thoughts I had on them as they came upon me:

bloom, joyful song, strengthen, make firm. Be strong, fear not. no beast of prey. “They will meet with joy and gladness, sorrow and mourning will flee.”

kindness and truth shall meet, justice and peace shall kiss.

lowered the man on the stretcher – where there’s a will, there’s a way. “we have seen incredible things today.”

Don’t we see incredible things every day? Or is just that we’re hyper-aware during Advent?

Is it possible that when we’re told to slow down, we have a knee-jerk reaction and start a new to-do list?

We are our own worst enemy.

We can be self-sacrificing, but we are also so easily self-sabotaging. My personal foible is the television and the clutter. The television can be my therapy, one of my coping tools, but it also keeps me from writing. I get stuck in a vortex of television as meditation. My son clutters my office, and when I see it, instead of simply moving it where he’ll see it and take care of it, I’ll leave it for him and then do nothing productive because I’m being bombarded with the clutter.

Even just sitting in the presence, eyeing the flickering light of the candle, feeling the warmth of the tea on my palms through the porcelain, hearing yesterday’s choir during mass in my head, anticipating the coming of Jesus, and remembering what he has personally brought to my own life.

It is a short Advent, but it’s not too late to start something positive. It is never too late for that. 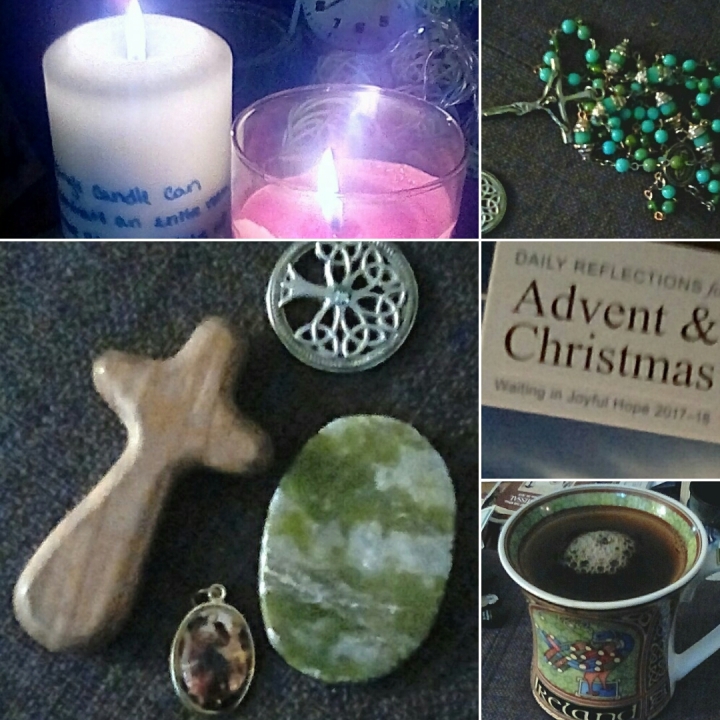