We were at a work event for my son’s job this afternoon when I found out that the Cathedral of Notre Dame in Paris was on fire. Just the view on the computer screen with the white smoke, the bright orange flames licking the stones and rising higher and higher was speech stopping; it was mind-numbing to me. I have a sensitivity to viewing buildings burning. I think it brings me to 9/11, it brings me to California wildfire devastation, and with television and social media it brings it literally into our fingertips.

As of this writing, I believe the two towers have been saved even though the spire collapsed. One of the rose stained glass windows was destroyed, but three remained. The statues that had been on the spire were removed four days ago as part of the renovation. The art, artifacts, and holy relics were saved after being removed during the fire. These are all good things.

This church is nearly one thousand years old. The person who laid the first stone was not alive at its completion. As it has been before, it will be rebuilt because like the church of people remains in perpetuity, the building will be repaired, rebuilt, and it won’t be the last time. The idea, the ideal of the church family lives on in the people who will return to Notre Dame.

In the meantime, we can mourn the physical building as we mourn the death of a loved one and know it will rise again. 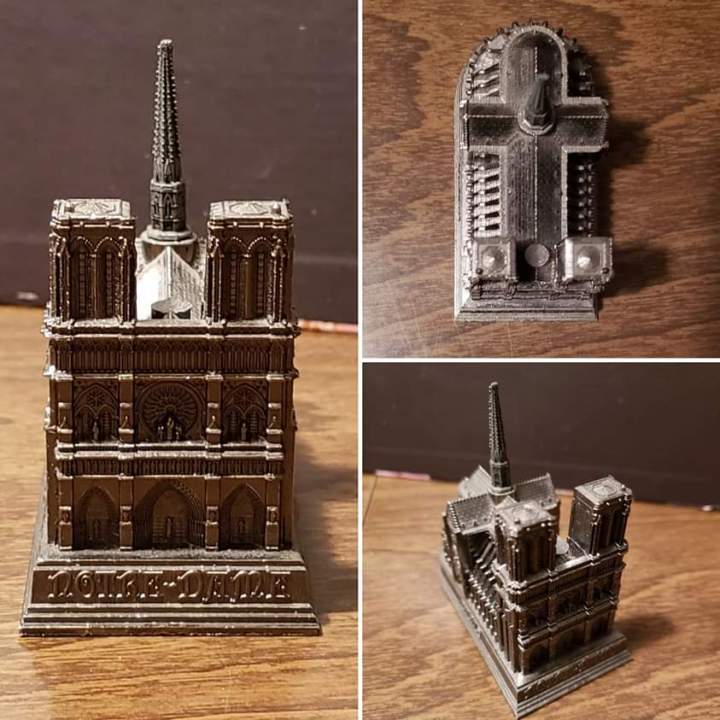 I have never been to Notre Dame in Paris, France, but my son visited while on a school trip in his senior year in high school. Knowing how close I am to my own local church and my Catholic devotion brought this home for my souvenir from his visit, ironically also during Holy Week. It sits on my bookshelf where I look at it every now and then, and after seeing the cathedral burning, upon coming home I took this pewter replica in my hand and turned it over, touching the carvings, pressing on the spire, tracing the cuneiform. It was sad and comforting at the same time. (c)2019